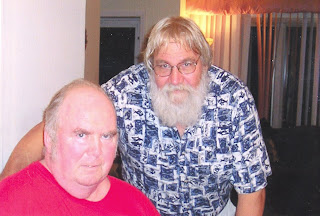 On September 8th, 2009 Joe Scherer passed away at the age of 61. I had lost contact with Joe for about 20 or so years because he moved to Iowa and I had moved and left no forwarding address. Then Bruce Katt called me and said Joe was visiting his sister on Long Island and found his phone number in the book and paid a visit on him and his wife Andrea. I phoned him on February 10th, 1998, his 50th birthday and we talked for 2 hours and caught up on the past 20 years very quickly. Two week's later, he called me on my 50th birthday and we talked for another 2 hours. We got together for dinner every 2 years or so with Joe and his wife Linda (who was his soul mate). Bruce and his wife and my wife, Laura. In late August, Joe, his wife and 3 family members came to my home and we went out to dinner, (Bruce was away). We did nothing but talk about old times and some of the crazy hings we all did, like hanging out at the bench (road block 145th Ave. & 156th Street) in the freezing cold or driving to Bear Mountain for a cup of coffee, and the time we picked up a hitchhiker who was going to Chicago - we took him to New Jersey (its a good thing we had to go to work the next day or God only knows where we would have driven him!).
We talked about someday getting together with all our old friends. We shook hands and said goodbye. About a week and a half later, Linda called and told me Joe had died that morning. I will miss him dearly, as I know all of you will as well.

Just a few words from me as well:
I didn't know Joe and Linda very long, but felt a connection, perhaps because of how Tom felt about him. I wish you guys could have seen Tom and Joe together - both of their faces lit up like a Christmas Tree especially when talking of the old days when they were young. It was a joy to see. Joe will be sorely missed by all. May God rest his soul.
Laura Conlon
Posted by Jerry Morris at 5:52 PM